What do the environmental and social standards regulate?

The standards require banks to carry out certain checks before approving projects from countries and corporations. For example, they may cover the protection of indigenous communities or forests. They can also determine whether climate-damaging projects such as coal-fired power plants are financed. What happens in the event of community resettlement and how people are financially compensated is also part of such standards.

If you ask banks or companies this question, they usually answer: World Bank standards. These "safeguards" for the part of the World Bank Group [1] that finances the public sector (International Development Association/IDA and International Bank for Reconstruction and Development/IBRD) were the first and have set standards worldwide.

In Germany, the World Bank standards serve, among others, the Kreditanstalt für Wiederaufbau (KfW) as a basis for their project assessments for its foreign transactions or Euler-Hermes for export credit guarantees. The Equator Principles, which are also used by private banks around the world, are based on standards of the private sector divisions of the World Bank Group, the International Finance Corporation (IFC) and the Multilateral Investment Guarantee Agency (MIGA).

Almost all international and national development and investment banks have now developed their own standards. These standards all use a similar system, but differ significantly in their binding nature and scope.

For what reasons did the World Bank introduce such standards?

It would be a misconception to assume that the World Bank introduced environmental standards out of sheer philanthropy and concern. Rather, it was triggered by protests against the Bank's mega-projects, which were taken to the capitals of major shareholders such as the U.S., Germany, France and the U.K. by affected people and non-governmental organizations in the 1980s. Every time a problem was spelled out for the World Bank, a new standard emerged. Ergo: no pressure, no standards.

Why are they incomplete?

The "organic" emergence of the safeguards has always left gaps in some areas. Individual standards were also formulated with varying degrees of precision. In 2010, the World Bank's internal and independent audit department IEG identified a need for improvement in a review of the effectiveness of the standards. At the same time, the review found that properly applied safeguards play a large part in the development impact of World Bank projects.[2]

How have the standards evolved in recent years?

In 2012, the World Bank stated that a fundamental revision of the standards was needed due to existing gaps and new topics ("emerging issues") such as human rights, climate change mitigation, gender equality, LGBTI [3] or rights of persons with disabilities. The first draft was published at the end of July 2014. Massive criticism came from some member states and NGOs because the "emerging issues" had not been sufficiently taken into account. For example, although the IEG review unit had found in its 2010 review that the Bank should not limit its standards to investment projects only, but also extend them to so-called program-based lending, this was not changed.[4]

Outrage was also caused by the fact that the draft represented a significant dilution of existing standards, even though World Bank chief Kim had repeatedly emphasized in public statements that there would be "no dilution". Two examples:

Because of all these weaknesses, in September 2014 activists protested in front of the World Bank representation in Brussels with masks showing World Bank President Jim Kim with a Pinocchio nose. 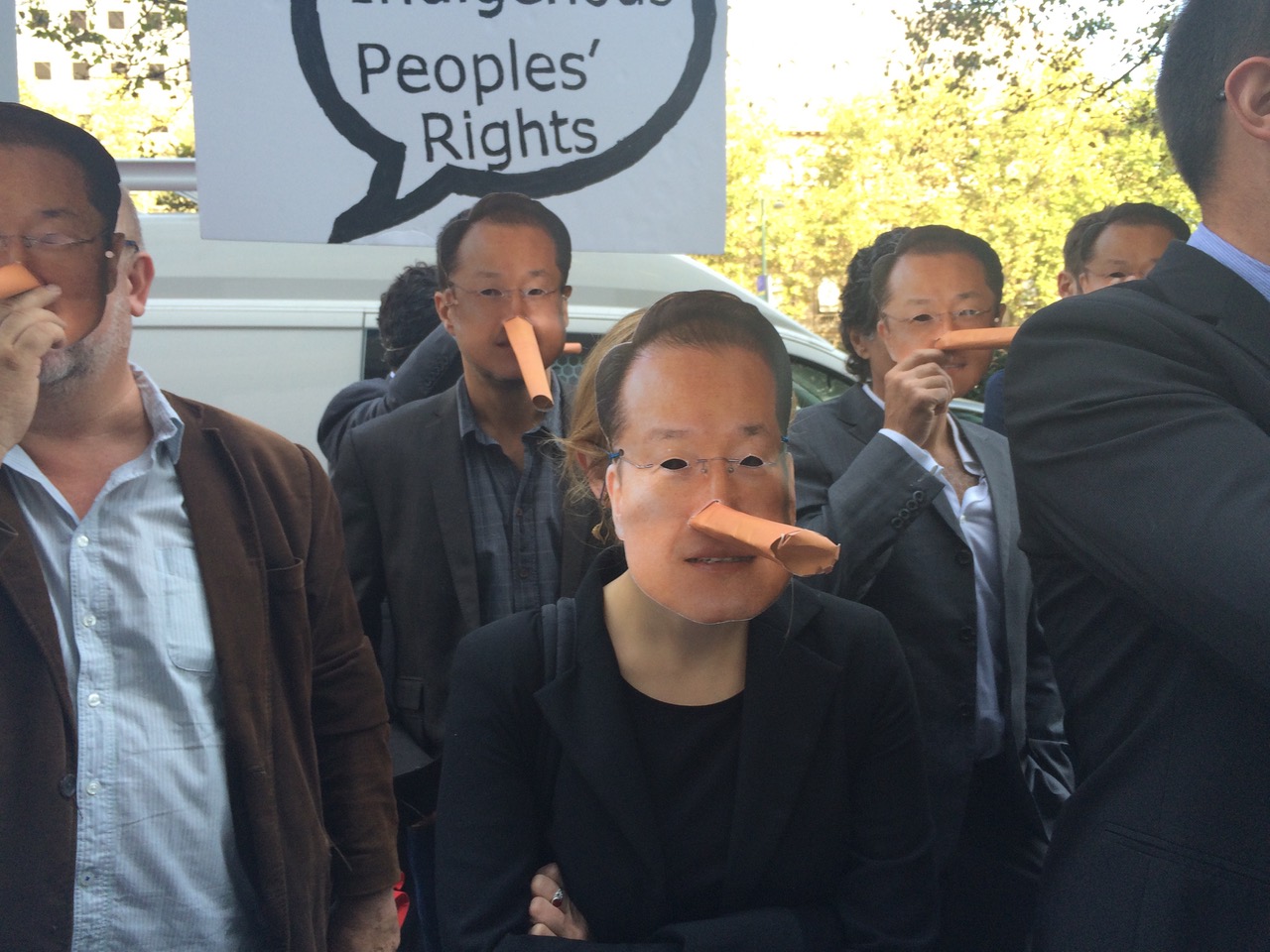 What are the weaknesses in the World Bank's current standards?

On August 4, 2016, after four years of debate, the World Bank Board of Directors adopted new Environmental and Social Standards (ESF), despite massive criticism of the draft's weaknesses. The existing binding rules have been replaced with flexibly designed standards. Among other things, member states have allowed the World Bank to finance projects in areas that are particularly important for indigenous peoples and for nature conservation. There is a lack of clear and binding requirements on when and how environmental assessments must take place before a project begins and how affected parties must be informed. There are also fewer hurdles for forced resettlement: The World Bank is now allowed to approve projects without knowing the number of people affected and plans for their resettlement and livelihood restoration. Recipient countries now have the option of replacing World Bank standards with their own. So far, it is unclear how the World Bank will ensure that their standards match its own or are of a similarly high standard and advance development. The new World Bank standards also do not include a mandatory check for possible human rights violations. On a small positive note, the World Bank is introducing a standard for worker protection. But even this standard falls far short of the recommendations of trade unions, so that the new ESF standards are overall a step backward and by no means a step forward.

What is behind the dilution of standards?

The World Bank is responding to increasing competition in the field of development finance and apparently wants to become more attractive by weakening standards - which means making its money "flow" faster and with lower environmental and human rights requirements. Thus, in July 2015, the new development bank of the BRICS countries started its work. The largest shareholder, as with the new Asian Infrastructure Investment Bank AIIB, is China. The AIIB began operations in January 2016. Alongside other EU member states, Germany is a founding member of the AIIB and the largest European investor. The new infrastructure bank apparently wants to attract customers with particularly low protection standards - for more on this, see "AIIB: Fig Leaf Germany?" Interestingly, the AIIB hired the author of the new ESF, who retired from the World Bank, to develop the AIIB standards. The result is a copy-and-paste of the World Bank ESF with further toning down.

What is the state of play?

The new World Bank standards are called the Environmental and Social Framework (ESF). They have been in effect since Oct. 1, 2018, and are now being applied to new projects. The old safeguards still apply to ongoing projects. However, the concrete implementation of the new ESF poses problems for both the World Bank management (according to its own statements) and the borrowers, as the implementation guidelines ('guidance notes') are at least as vaguely formulated as the standards. For this state of the guidance notes the term "it's a living document" has been created - it is a "living document" into which changes can still be inserted.

For those affected, it becomes even more difficult to be heard and protected, because the World Bank no longer feels responsible for the implementation of a loan project. It contents itself with being informed about the progress and controls mainly according to the files. Affected people do not have to be informed that they can complain, for example, to the so-called 'Inspection Panel'.

Other banks, such as the Asian Development Bank (ADB), are also currently planning to revise their protection standards. If they follow the trend, there is a risk of further dilution. There is still a lot of work ahead for urgewald and our partners.

[1] For an overview of the individual areas of the World Bank Group, see: https://urgewald.org/sites/default/files/Info_Weltbank%202017.pdf
[2] IEG, Safeguards and Sustainability Policies in a Changing World, An Independent Evaluation of the World Bank Group Experience, 2010.
[3] https://en.wikipedia.org/wiki/Intersex_and_LGBT
[4] In the Bank's public sector portfolio (IDA and IBRD), just under 50% are investment loans, with a downward trend. Investment loans are related to a specific project (e.g. dam, port, railroad line, power plant, etc.). Program-based loans include pure budget support or broader projects, e.g. to expand the transport infrastructure of a region or country.

Back to the overview