At the UN Climate Summit today, Urgewald, Stop EACOP, Oilwatch Africa, Africa Coal Network and 33 further African NGOs released the Report “Who is Financing Fossil Fuel Expansion in Africa?” The report identifies 200 companies that are exploring or developing new fossil fuel reserves or developing new fossil infrastructure such as liquefied natural gas (LNG) terminals, pipelines or gas- and coal-fired power plants in Africa. “Fossil fuels are at the root of the climate crisis and Africa is harder hit by this crisis than any other continent. Yet 200 coal, oil and gas companies are flooding the continent with dirty energy projects that are completely incompatible with the Paris climate goals and the 1.5°C limit,” says Omar Elmawi, coordinator of the Stop EACOP Campaign and Executive Director of Muslims for Human Rights. According to the NGOs’ report, these companies are pursuing fossil expansion projects in 48 out of 55 African countries.

While delegates are negotiating at the UN Climate Summit in Sharm El Sheikh, 55 companies are busy prospecting for new oil and gas fields in Egypt alone. Since 2017, 886,000 km2 – an area larger than France and Italy combined – have been licensed for new oil and gas exploration in Africa.[1] Out of the 45 African countries, where the oil and gas industry is currently prospecting for new finds, 18 are what the industry calls “frontier countries”, i.e. countries like Namibia, Uganda or Somalia that have little or no existing oil or gas production.

The report’s analysis of Rystad Energy data shows that total capital expenditures for oil and gas exploration in Africa rose from US$ 3.4 billion in 2020 to US$ 5.1 billion in 2022. African companies accounted for less than one third of this sum. The bulk of exploration for new oil and gas resources in Africa is carried out and financed by foreign companies. “Every dollar spent on new oil and gas exploration goes against the 1.5°C roadmap laid out by the International Energy Agency in 2021. Financial institutions need to drop clients that are still searching for new oil and gas resources we can’t afford to burn,” says Heffa Schuecking, director of Urgewald.

Who Are the Largest Developers of New Oil and Gas Fields in Africa? 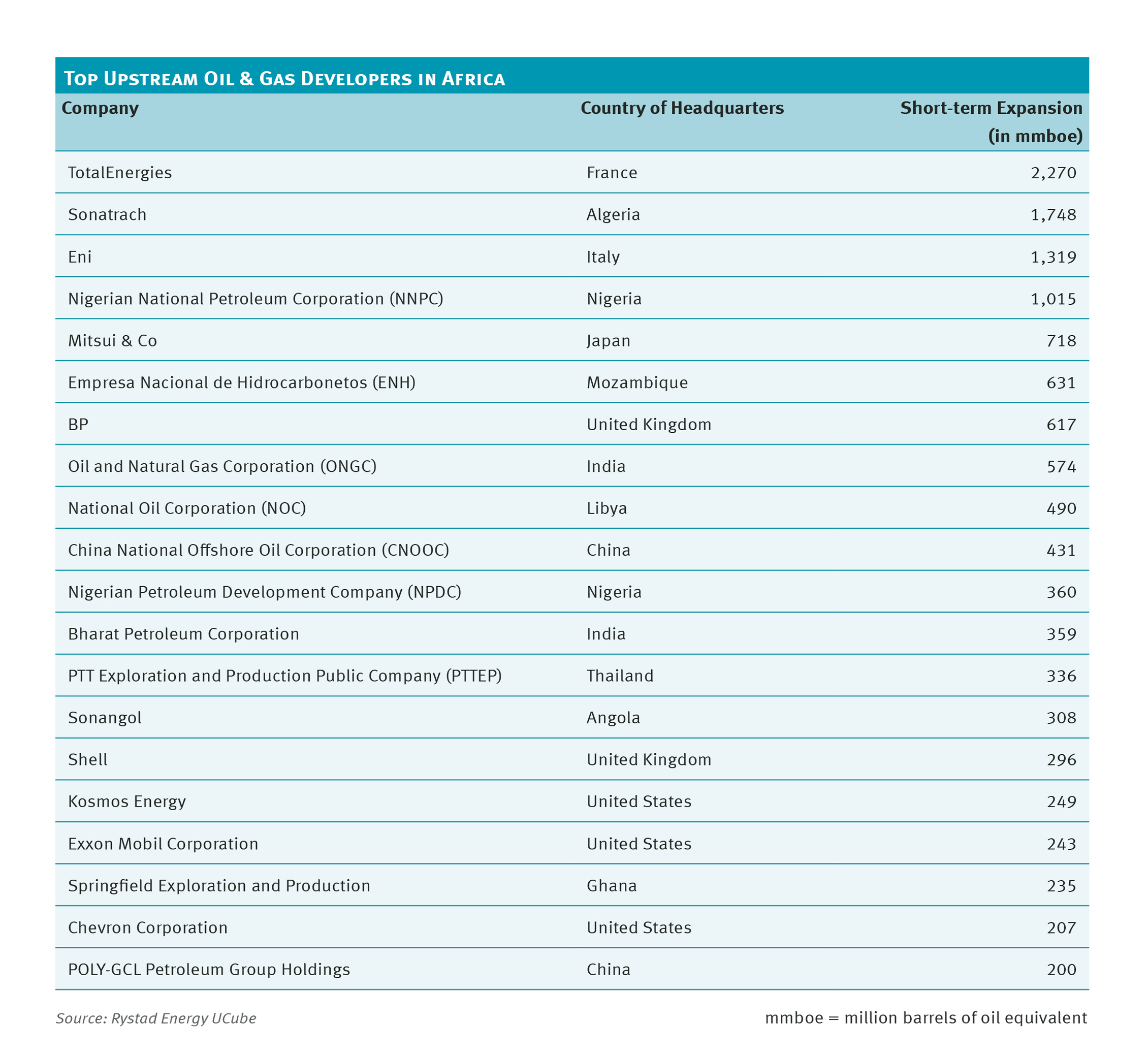 Fossil fuel infrastructure such as pipelines and LNG terminals are expensive to build, and their intended operational lifetime spans decades. TotalEnergies’ and CNOOC’s East African Crude Oil Pipeline (EACOP) will cost over US$ 5 billion and is expected to operate for at least 20 years. ExxonMobil’s and Eni’s Rovuma LNG project in Mozambique and Equinor’s Tanzania LNG project are each estimated to cost US$ 30 billion and would operate for more than 30 years. These projects will lock in fossil emissions over decades and lock out host countries’ opportunity to build a renewable future. According to the International Energy Agency, “achieving full access to modern energy in Africa by 2030 would require investments of US$ 25 billion per year,” a sum that is comparable to the cost of just one large LNG project.[3]

In Africa, oil and gas companies are developing new LNG terminals with a combined capacity of over 87 million tons per annum. These projects will increase Africa’s existing LNG terminal capacity by 116%. And over 89% of the new LNG infrastructure is being built for export, mainly to Europe and Asia. “Europe’s fossil fuel addiction is a major driver behind new LNG projects in Africa. The rush for Africa’s oil and gas has nothing to do with increasing energy access for Africans,” says Anabela Lemos, director of Justiça Ambiental (Friends of the Earth Mozambique).

Coal Still Not Being Phased Down or Out

Although Africa’s coal plant pipeline has shrunk over the past four years, the coal industry is still expanding on the continent.[4] New coal power plants, coal mines or coal transport infrastructure are planned or under development in 11 African countries. In total, 10,135 MW of new coal-fired capacity are still in the pipeline. Over half of the new coal power capacity is planned in Zimbabwe and will largely power mining operations instead of providing power to the 47% of the population, which still has no access to electricity. Currently, 70 new coal mines or mine extensions are being developed in 9 African countries. The countries with the largest number of coal mining projects are South Africa (49), Zimbabwe (6), Botswana (5), and Mozambique (4).

Who is Financing Fossil Fuel Expansion in Africa?

“Africa has 39% of the world’s total renewable potential, yet foreign investors continue to bankroll a fossil future for our continent,” says Bobby Peek from the Life After Coal Campaign in South Africa. In July 2022, over 5,000 institutional investors held shares and bonds totaling US$ 109 billion in companies developing new fossil fuel projects in Africa.[5] The top 23 investors account for 50% of this sum. Out of these top investors, 14 are headquartered in the US, 6 in Europe, 1 in Canada, 1 in India and 1 in South Africa. The largest institutional investor in fossil fuel expansion in Africa is the US-based investment giant BlackRock with holdings of over US$ 12 billion. Next in line are Vanguard (US$ 8.4 billion) and the Norwegian Government Pension Fund (US$ 3.7 billion). 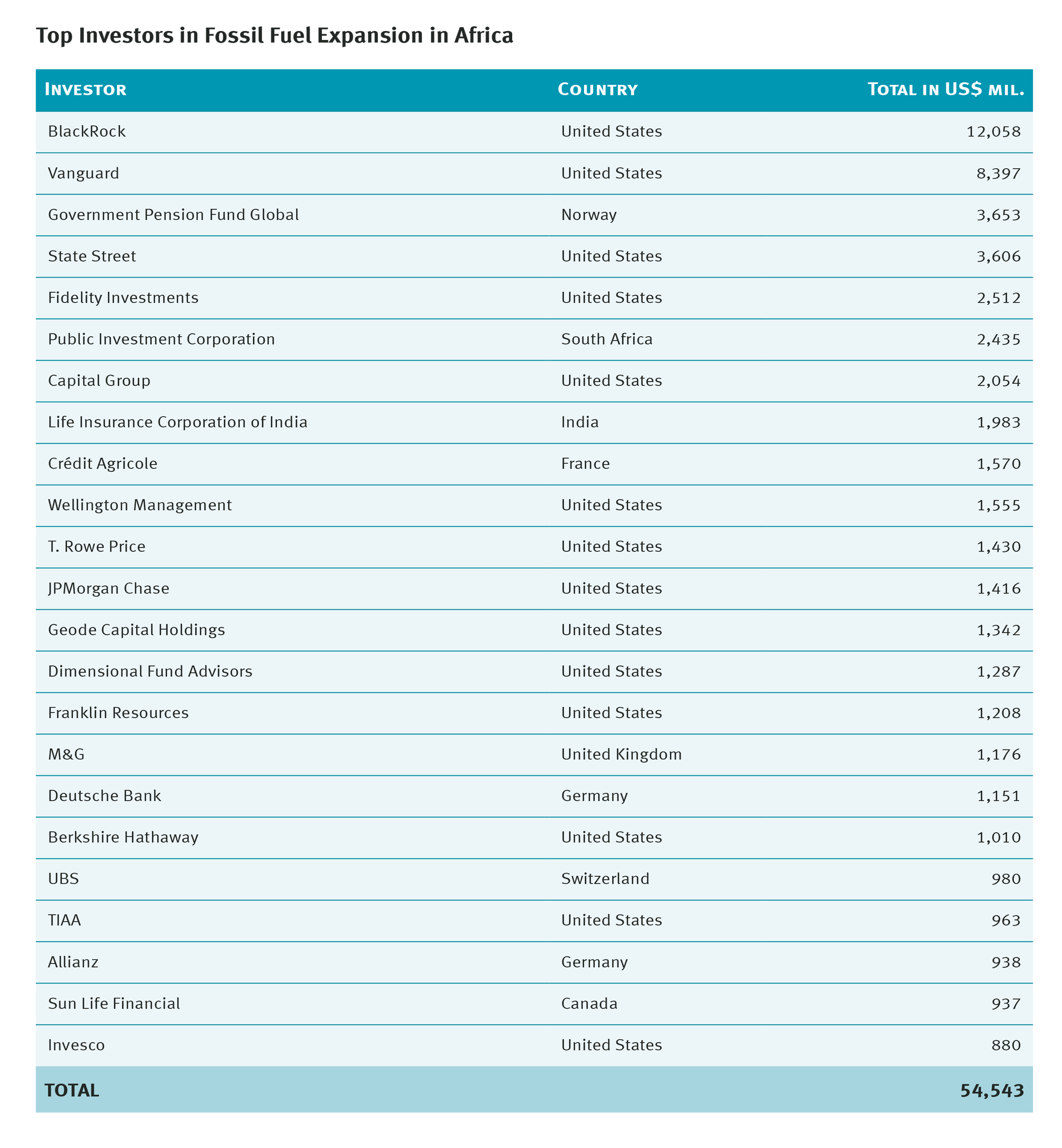 Commercial banks channeled over US$ 98 billion to companies developing new fossil projects in Africa between January 2019 and July 2022. Out of this total, US$ 44 billion were provided through loans and US$ 54 billion through underwriting of new share and bond issuances. The number one banker of fossil fuel developers in Africa is Citigroup (US$ 5.6 billion), followed by JPMorgan Chase (US$ 5.1 billion) and BNP Paribas (US$ 4.6 billion). 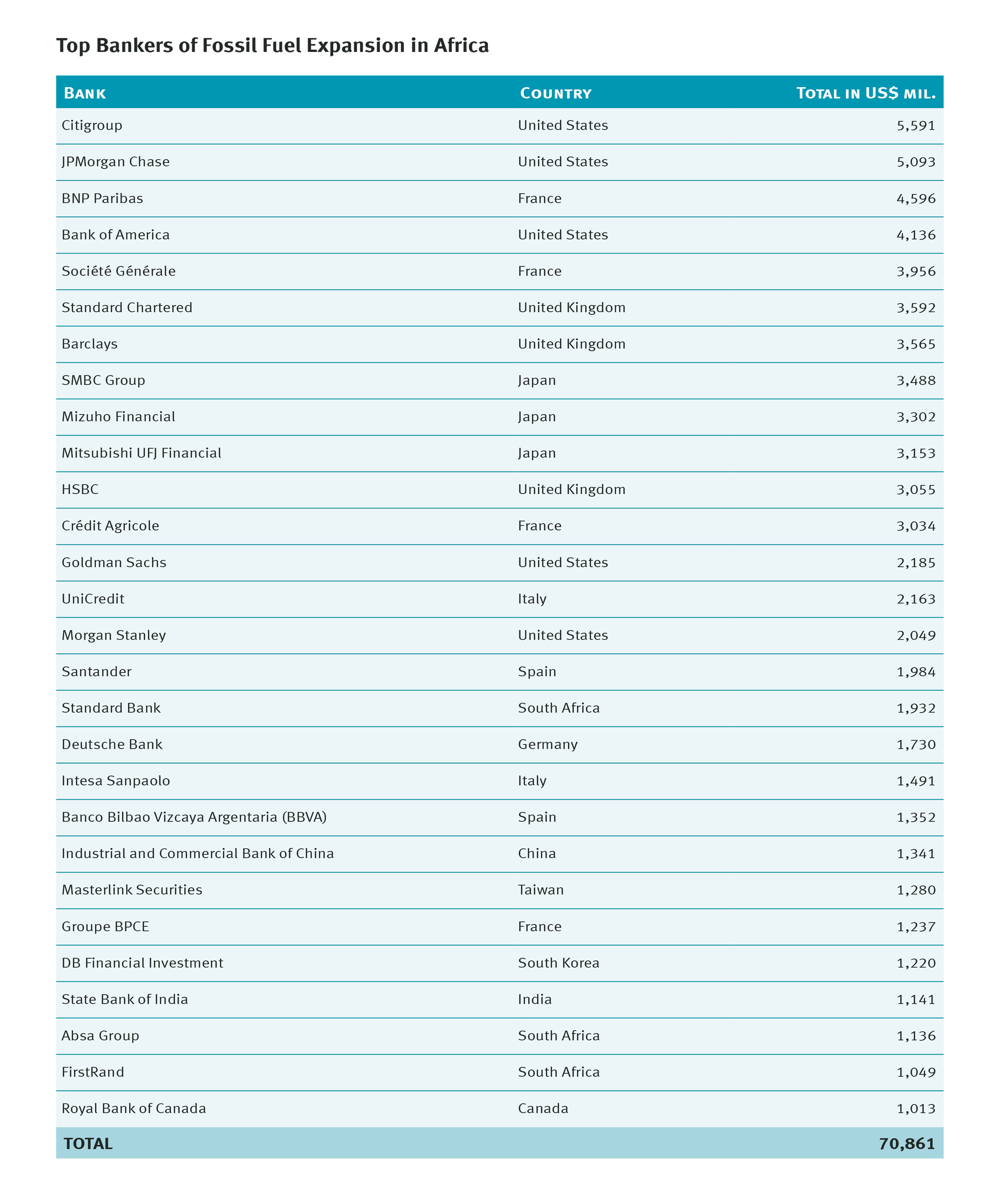 According to the NGOs’ report, 72% of bank support for fossil fuel developers in Africa came from banks that are members of the “Net Zero Banking Alliance.” “Making net-zero promises for tomorrow is meaningless if you are spending billions of dollars on fossil fuel expansion today. Financial institutions that claim to be lining up for 1.5°C need to stop supporting clients who are driving us towards 2.8°C,” says Heffa Schuecking.

As Omar Elmawi says on behalf of the 36 African co-publishers of the report,
“It is time for financial institutions to step back from companies that are blowing up the world’s carbon budget and locking Africa into the dirty energy sources of the past. Civil society organizations all across Africa are calling for a green renewable energy future that provides energy access to all.”

The full report can be downloaded here.

[2] All of the figures in this section are based on GOGEL’s short-term upstream oil and gas expansion metric which covers assets that are already in the field evaluation or development stage and will enter production within the next 1-7 years. More information at https://gogel.org

[5] For multinational companies, we used adjustors to calculate which portion of a corporate loan or investment supports its fossil activities in Africa. A full explanation of our methodology can be found in the report. The financial research was conducted by Profundo.