As the World Bank conducts its digital Annual Meeting, civil society groups criticize the bank’s ongoing investments in the fossil fuel industry. Research conducted by Urgewald reveals that the World Bank Group has invested over $12 billion in fossil fuels since the Paris Agreement, $10.5 billion of which were new direct fossil fuel project finance.

In order to arrest the escalating climate crisis, the world needs an urgent and just transition from fossil fuels to renewable energy. Data shows that the energy transition is happening far too slowly. Researchers from several expert organizations, including the UN Environment Program, determined the world is currently on track to produce 120% more fossil fuels by 2030 than is compatible with a 1.5°C pathway. [1] Thus, we are already on track to miss the Paris Climate Agreement goal. In addition, according to the Economist, annual investments in wind and solar capacity need to reach about $750 billion, which requires a tripling of current investment levels. [2]

Simply put, there is far too much invested in fossil fuel production and not enough in renewable energy. Actions that slow down the energy transition result in more destabilizing climate-related consequences. The World Bank states that without urgent action, climate change will push more than 100 million people into poverty by 2030. [3] 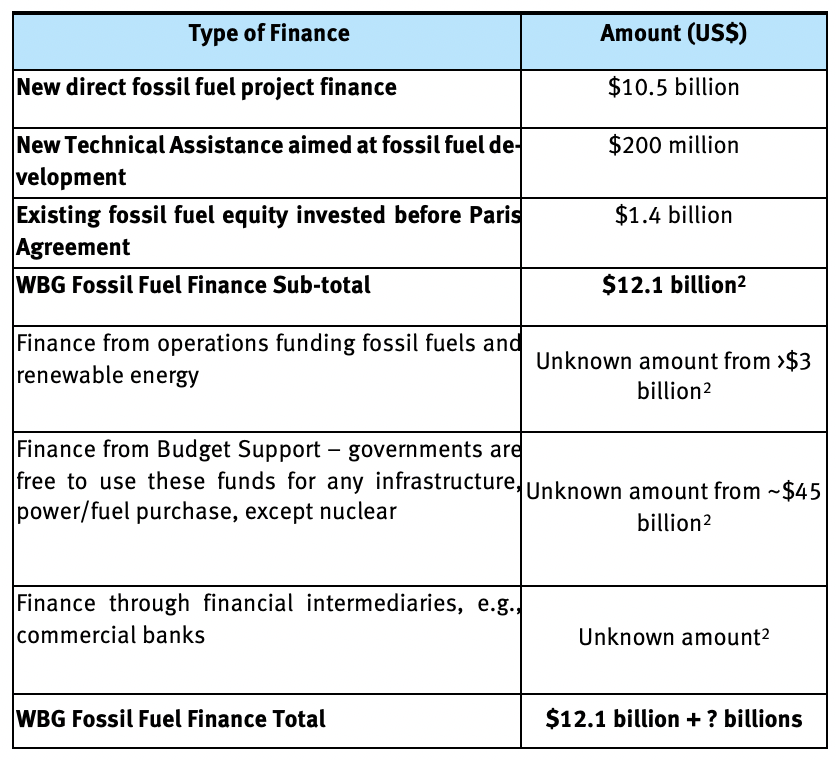 3 Only a portion of this amount goes into fossil fuels. The actual amount is unknown due to a lack of transparency.

“Instead of assisting a just energy transition, the World Bank is helping to expand fossil fuel production in G20 countries that are already top producers, such as Brazil and Mexico. Simultaneously, the Bank is paving the way for the creation of new Petrostates in frontier countries, such as Mozambique,” adds Ute Koczy, Finance Campaigner at Urgewald.

Out of Time – Out of Fossils
The world is running out of time to avert a worsening climate crisis. At this point, every public dollar the World Bank invests in fossil fuels pushes the world further and further away from being able to limit global warming to 1.5°C. The World Bank must get out of all fossil fuels now. The Bank’s public assistance should only be used to assist countries towards a just energy transition. Rather than locking countries into dependency on the fossil fuel industry, the Bank should finance job training for workers to leave those industries. 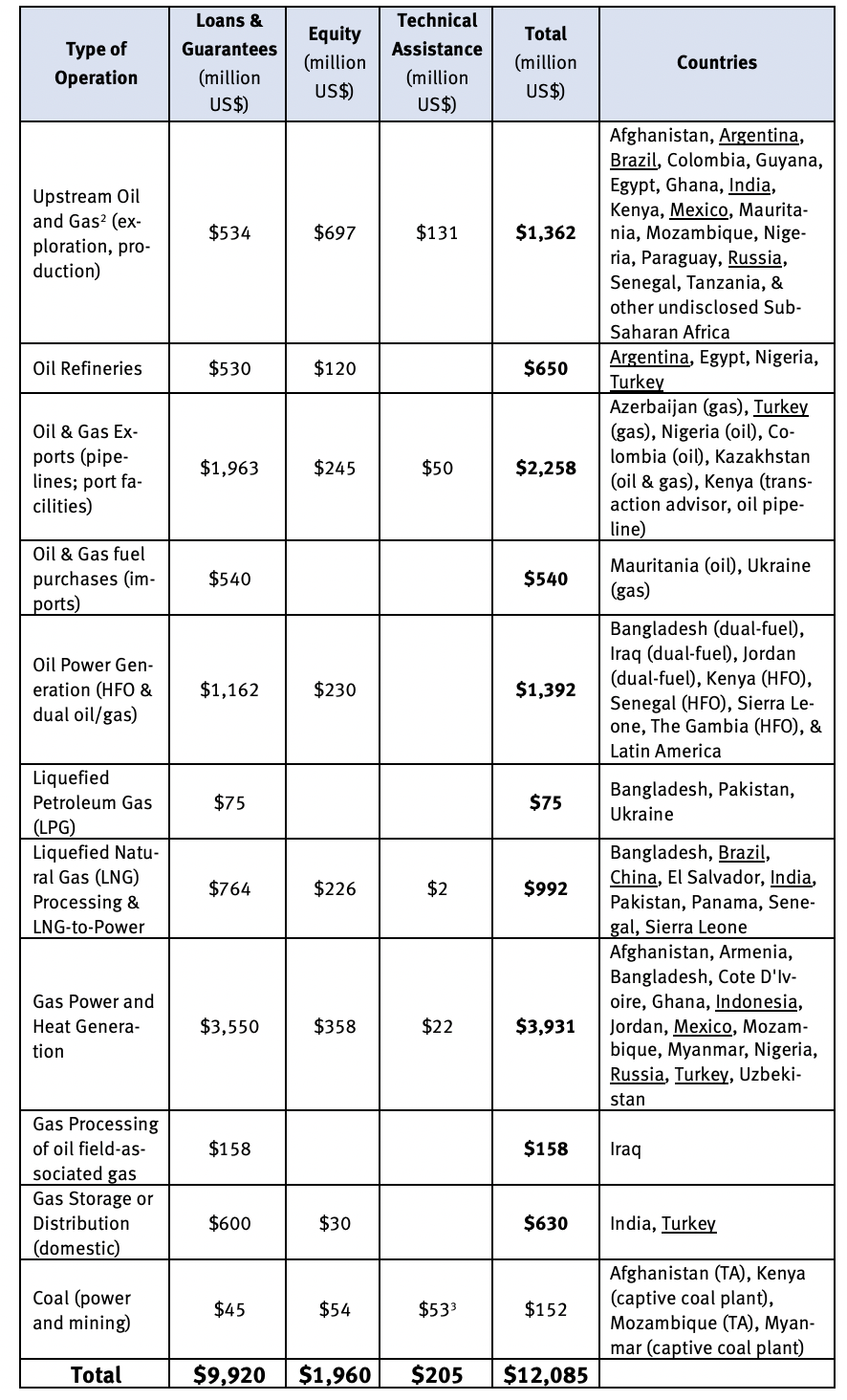 3 Technical Assistance that targeted coal mining in Mozambique also targeted gas, thus the $53 million for coal is not added to the overall total to avoid double counting. Furthermore, the finance for technical assistance in Afghanistan was provided by the donor-funded Afghanistan Reconstruction Trust Fund.  Thus, no finance was included in this table as it does not come from the World Bank’s budget.

By Bank Division2 (million US$)

1 Figures represent World Bank Group project finance for fossil fuels (oil, natural gas and coal) approved since the UN Paris Climate Agreement was adopted by consensus on December 12, 2015. All data were collected from project information contained on the World Bank Group's webpages. Data do not include WBG funding through technical assistance ($200 million for fossil fuel development since Paris Agreement), non-earmarked budget support ($10 - $20 billion annually), financial intermediaries, or active equity invested before December 13, 2015. It is important to note that over 50% of IFC's funding goes through financial intermediaries, which on-lend to projects, including fossil fuel projects.

[1] SEI, IISD, ODI, Climate Analytics, CICERO, and UNEP. (2019). The Production Gap: The discrepancy between countries’ planned fossil fuel production and global production levels consistent with limiting warming to 1.5°C or 2°C. http://productiongap.org/
[2] The Economist. (2020). Is it the end of the oil age? September 17, 2020.  https://www.economist.com/leaders/2020/09/17/is-it-the-end-of-the-oil-age
[3] https://www.worldbank.org/en/news/opinion/2017/09/14/global-warming-can-add-100-million-poor-people-by-2030
[4] The World Bank Group includes the International Development Association (IDA), the International Bank for Reconstruction and Development (IBRD), the International Finance Corporation (IFC) and the Multilateral Investment Guarantee Agency (MIGA).
[5] As part of the World Bank’s Energy and Minerals Sectors Strengthening Project II, in 2018, the Bank funded consultants “for the implementation of Brazil’s long-term oil and natural gas marketing policy.” According to Bank program documents, part of government marketing efforts include driving upstream investment into its pre-salt oil and gas resources, which included holding bid rounds for new onshore and offshore exploration areas in late 2019. In May 2020, WB approved an additional $38 million for further technical assistance.