At the UN Climate Summit in Sharm el-Sheikh today, Urgewald and 50 NGO partners released the first update of the “Global Oil & Gas Exit List” (GOGEL). GOGEL is a public company-level database that covers 901 oil and gas companies, which account for 95% of global oil and gas production. Besides providing detailed information on companies’ conventional and unconventional hydrocarbon production, GOGEL allows users to “look into the future” by revealing companies’ upstream and midstream expansion plans.

"Since GOGEL was launched, over 20 European banks, insurers, and investors have published promising oil and gas policies. 8 of them publicly reference GOGEL,” says Katrin Ganswindt, Fossil Fuel Finance Campaigner at Urgewald. “But hundreds of financial institutions have yet to adopt strict, science-based exclusion criteria for oil and gas companies whose expansion plans are not in line with 1.5°C. GOGEL was designed to help investors, insurers and banks adopt impactful fossil fuel policies.”

96% of the Oil and Gas Industry Is Expanding

Oil and gas companies are on a massive expansion course – 655 out of 685 upstream companies on GOGEL (96%) have expansion plans. Since 2021, the industry’s short-term expansion plans have increased by 20%. Currently, 512 oil and gas companies are taking active steps to bring 230 billion barrels of oil equivalent (bboe) of untapped resources into production before 2030.[1] Producing and burning these resources will release approximately 115 Gt CO2eq into the atmosphere. This is 30 times as much as the EU’s annual greenhouse gas emissions.[2] If the oil and gas industry simply maintained its 2021 production level of 56.3 bboe, it alone would exhaust our remaining carbon budget within 15.5 years.[3] 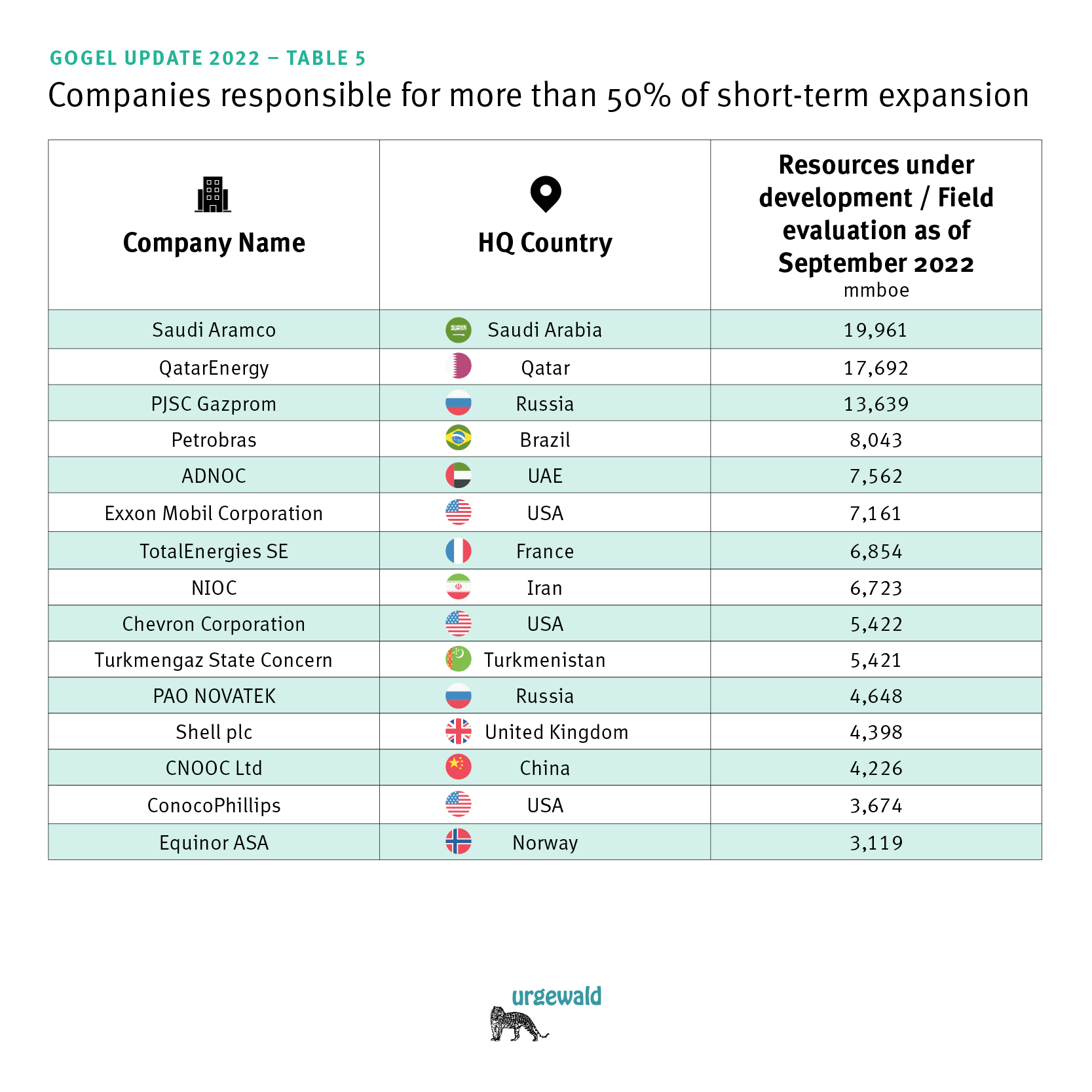 A tool to check if a company is Net Zero compliant

In 2021, the International Energy Agency (IEA) released the “Net Zero by 2050” report which specified a pathway for the energy sector to limit global temperature rise to 1.5°C. The report clearly states, “No fossil fuel exploration is required in the NZE [Net-Zero Emissions Scenario] as no new oil and natural gas fields are required beyond those that have already been approved for development.”[4] Our data shows that the industry, however, is still exploring and bringing new oil and gas fields into development.

GOGEL is the first tool that makes it possible to systematically assess whether a company’s activities are in line with the IEA NZE scenario. It analyzes companies’ expansion plans and determines the exact share of resources that “overshoot” the IEA scenario.[5] “The outcome of our calculations is truly frightening: 51.6% of oil and gas companies’ short-term expansion plans are not in line with the net zero emissions course put forward by the IEA,” says Fiona Hauke, senior oil and gas researcher at Urgewald. “Keeping these oil and gas resources in the ground is the bare minimum of what is needed to keep 1.5°C attainable.” 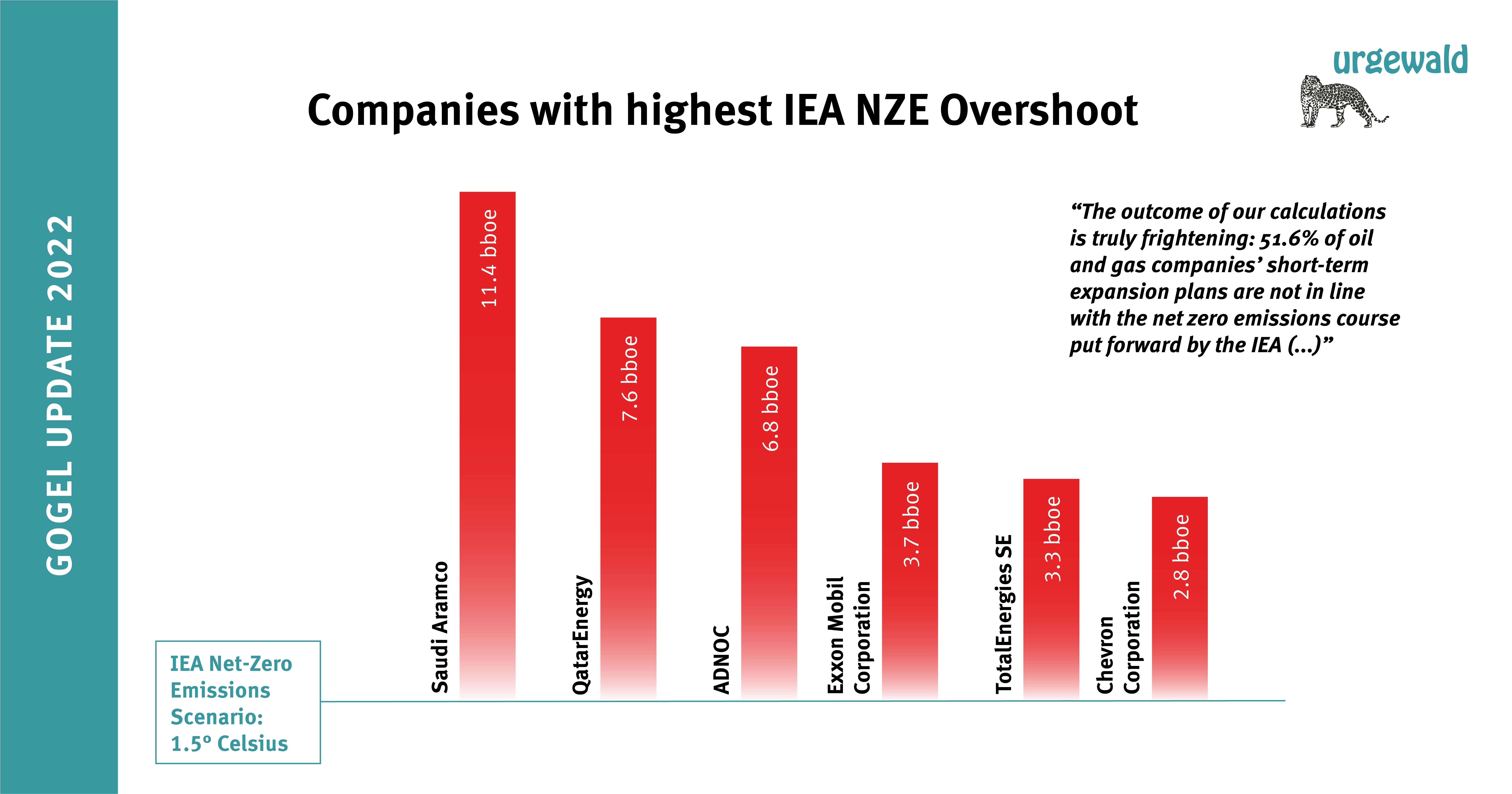 “The oil and gas companies are betting against our collective future. Their behavior also creates a high economic risk, for their financial backers and for themselves,” says Katrin Ganswindt. “A financial institution that takes its Net Zero commitments seriously cannot provide financing to companies that are recklessly busting our climate budget.”

Long-term Expansion: Locking Us into a Fossil Future

Oil and gas companies are not only planning rapid development in the short term. Their massive build-up of new fossil fuel infrastructure is threatening to lock the world into a high-emissions pathway. Current midstream expansion plans will more than double liquefied natural gas (LNG) export capacity globally, and new mega-pipeline projects like the Trans-Saharan pipeline would stretch across entire continents and beyond. Such oil and gas infrastructure is expensive to build, and its intended operational lifetime spans decades – a time horizon we simply do not have. 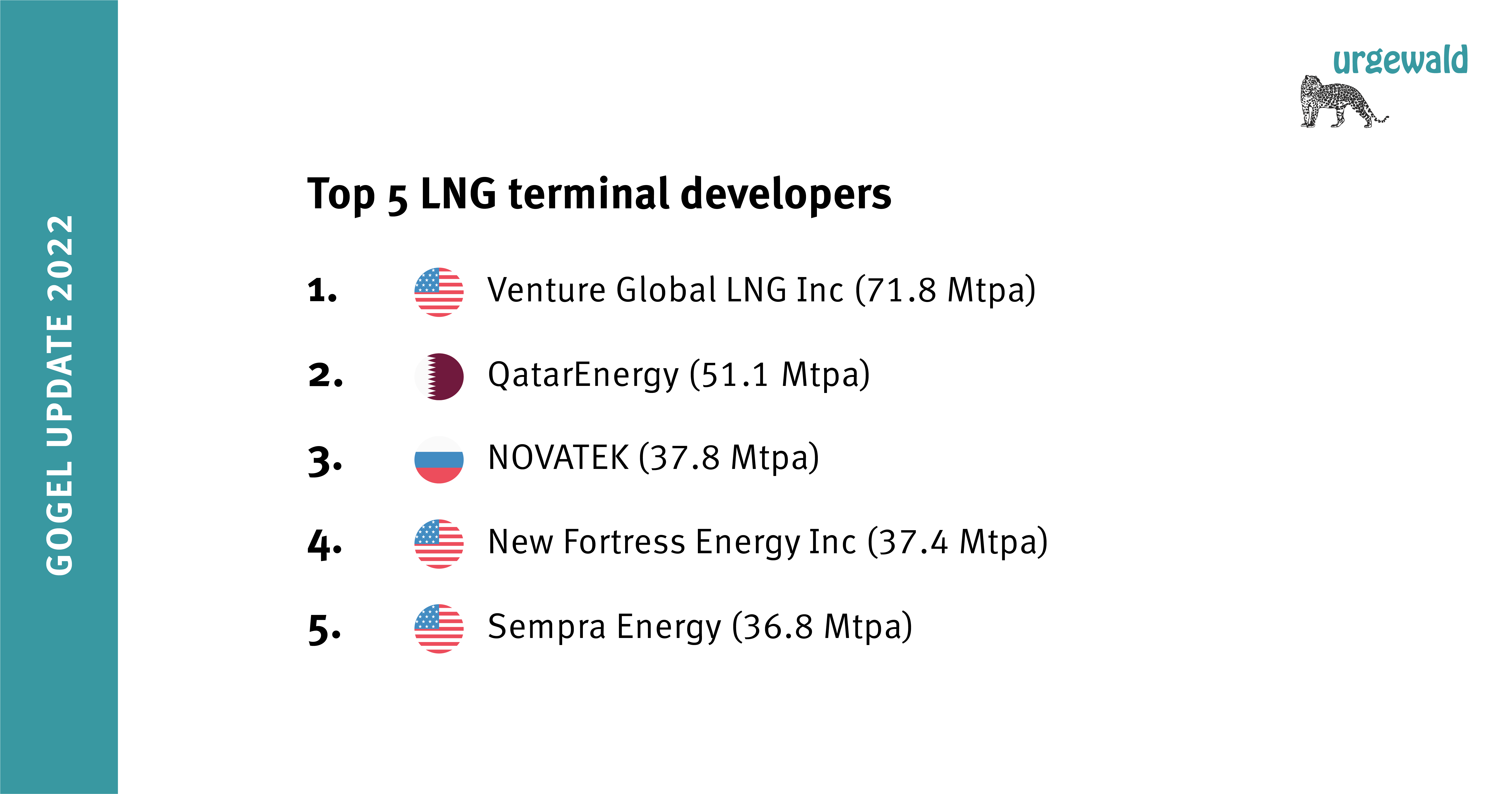 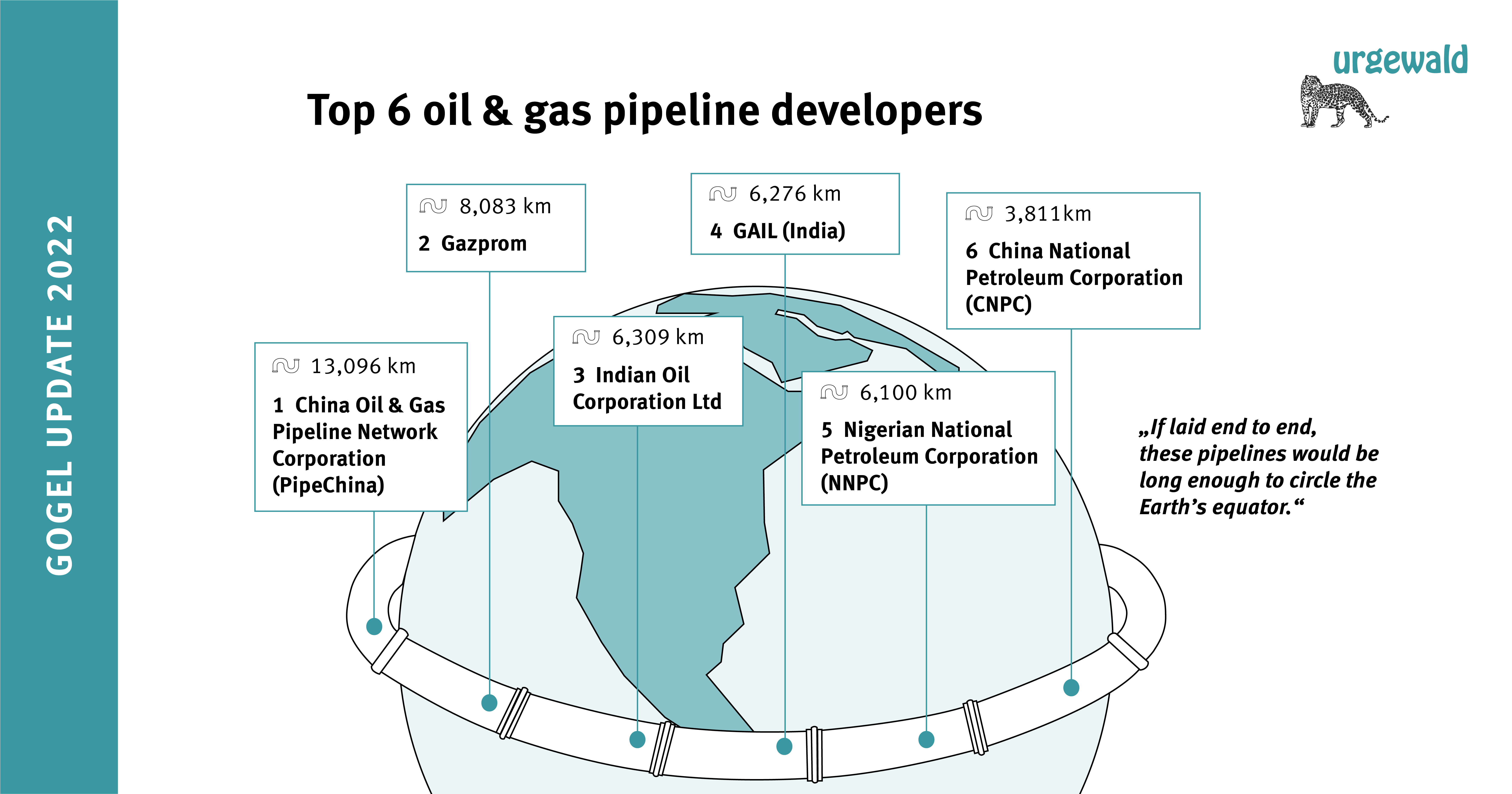 Out of the frying pan into the fire

Tightening gas markets spurred by Russia’s invasion of Ukraine have put LNG into the spotlight. While Europe is one of the regions that needs to phase out fossil fuels the fastest, close to 20% of LNG import terminals under development are located in European countries. “Liquefied gas is a solid problem and a false solution,” warns Lucie Pinson from the NGO Reclaim Finance. “The newly planned projects will come too late to solve Europe’s energy crisis. But what they will do is lock us into a high-carbon future and pose severe stranded assets risks. Private financial institutions must acknowledge the responsibility they hold and withdraw their support from new fossil infrastructure projects.”

The oil and gas industry is happy to take advantage of the current situation. More than half of global liquefaction capacity under development is located in the US (44%) and Canada (11%). Most of this “freedom gas”, as its proponents name it, would be fracked. Fracking is one of the dirtiest and most damaging extraction methods, used to access gas and oil trapped in deep rock formations. Fracking increases the risk of earthquakes, and fluids used in the process can poison ground and surface waters. Yale researchers have found that children living near fracking sites have a 2 to 3 times higher risk of developing leukemia.[7] 81% of global fracking takes place in the US and 53.5% of global unconventional short-term expansion is concentrated in the States.[8] 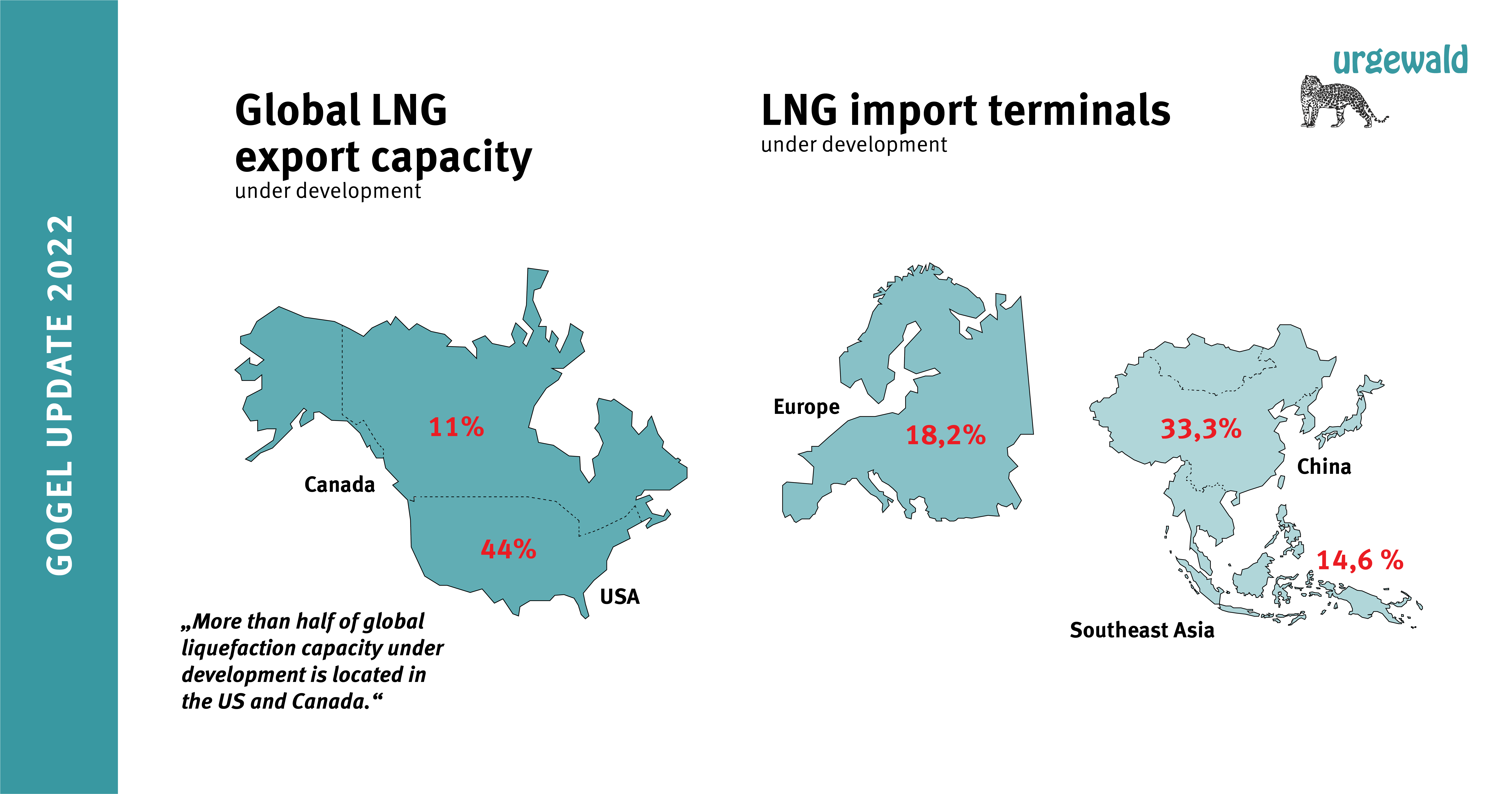 Exploration CAPEX in the Billions: The Industry Is Not Transitioning

Between 2020 and 2022, companies pumped more than USD 160 billion into exploration for new oil and gas worldwide.[9] Not one cent of this spending complies with the IEA’s NZE scenario. Nevertheless, global expenditure on exploration increased by 12.4% from 2021 to 2022. If global exploration expenditure since 2020 had been directed towards the energy transition, it could have almost doubled the US’s 2019 onshore wind capacity.[10]  Egypt, the host country of COP 27, is the perfect example of the complete disconnect between the action needed and the reality on the ground. 55 companies are exploring for new oil and gas resources across Egypt while the world’s governments come together in Sharm el-Sheikh to address the climate crisis. 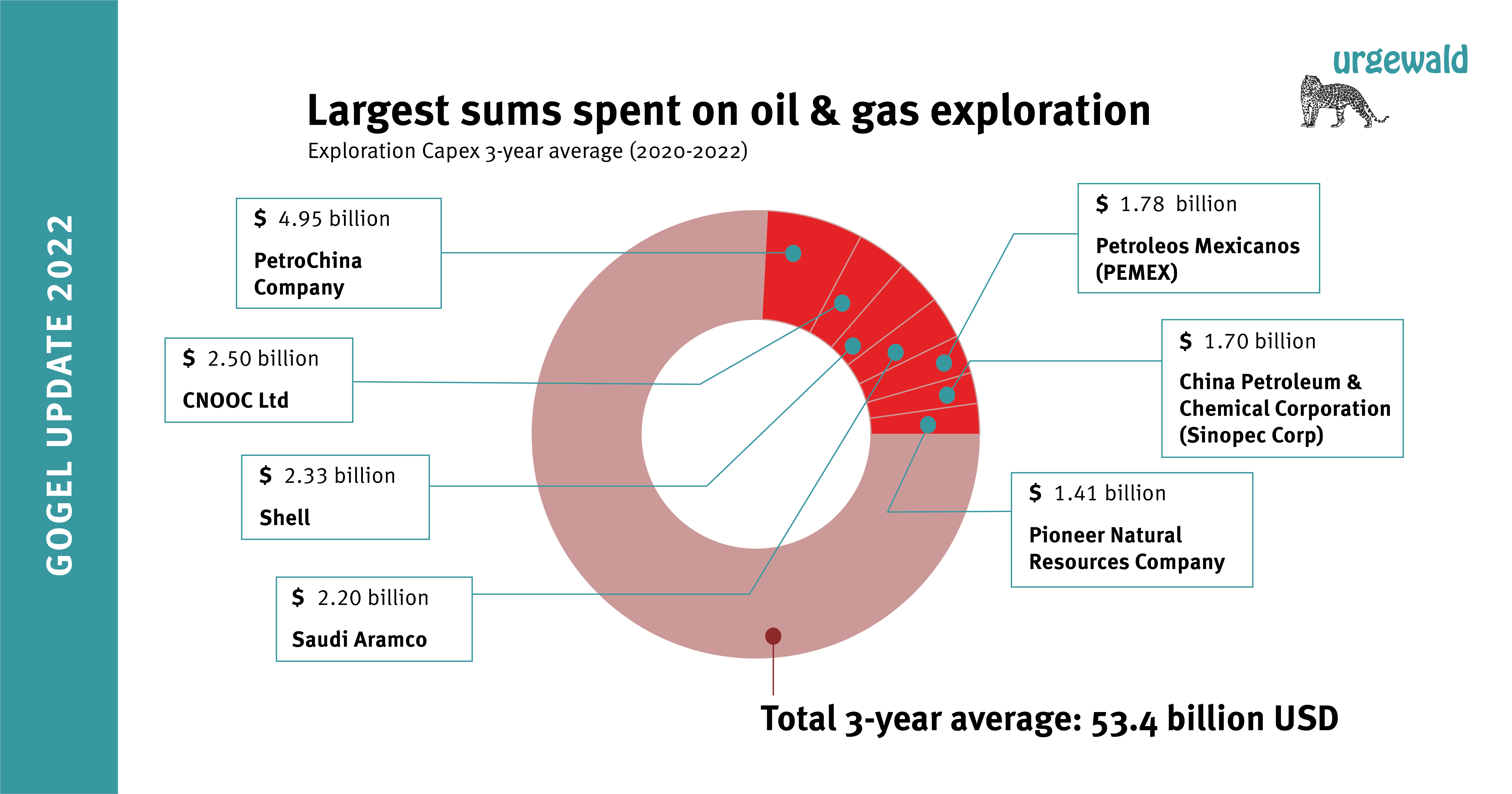 The Familiar Faces behind Oil and Gas Expansion

In almost every corner of the world, big oil and gas companies from Europe and North America are the key drivers of oil and gas expansion. To name 3 examples: TotalEnergies from France, ExxonMobil from the USA, and Shell from the Netherlands/UK are involved in oil and gas expansion on 6 continents. They are searching for new oil and gas resources in 69 of the 159 countries where exploration takes place. In the short term, they have upstream expansion plans in 31 different countries, and they are involved in pipeline and LNG expansion projects in 22 different countries. “It is high time that financial institutions recognize the simple truth these numbers tell. Any oil and gas policy that shies away from excluding major European and North American companies is not addressing the core of the problem,” says Katrin Ganswindt.

All over the world, from Uganda to the Philippines, local communities and activists are calling out oil and gas companies for their reckless expansion plans. As Omar Elmawi, Coordinator of the Stop EACOP Campaign and Executive Director of Muslims for Human Rights, says:

“The irresponsible, greed-addled expansion plans of oil and gas companies destroy local communities and whole ecosystems. They lead to persecution, displacement and all manner of environmental and social harm. African people do not want any of this. We demand the energy access and the just transition renewable energies can deliver. And we vehemently reject the prospect of another colonialist plunder of our home’s natural resources at the hands of avaricious oil and gas corporations that corrupt governments and throw whole countries into chaos. Africa deserves better. Our planet deserves better.”

The Glasgow Financial Alliance for Net Zero (GFANZ): A License to Greenwash?

Last year’s COP 26 saw the launch of the Glasgow Financial Alliance for Net Zero (GFANZ). Despite its promise to speed up the finance industry’s commitments on reducing greenhouse gas emissions, the lion’s share of the alliance’s members has so far failed to introduce adequate oil and gas exclusion policies. Handelsbanken, one of Scandinavia’s biggest banks, has been among the few financial institutions to follow up its GFANZ membership with concrete steps. It recently released an update on its environmental and climate change guideline. The guideline now excludes all oil and gas companies, which “aim to expand their extraction or are involved in the extraction of Arctic oil or gas, deep-sea extraction, oil sands, oil shale, heavy crude oil, shale oil, shale gas and extraction by fracking.” Only companies that stick to conventional oil and gas extraction methods and have a good transition plan can still receive financing.[11]

However, Handelsbanken is one of only 11 financial institutions with a policy that tackles oil and gas expansion on the company level.[12] Aside from these rare best practice cases, GFANZ has yet to deliver more than hot air.

GFANZ, in fact, under pressure from major US banks, quietly dropped the requirement for its members to align with the UN Race to Zero Campaign. Nevertheless, at the time of writing, the GFANZ sectoral alliances of banks, insurers and investors all remained Race to Zero partners.[13] “What counts here is not politics or financial interest but science. So, if any ‘net-zero’ or ‘1.5°C-aligned’ alliance or financial institution commits to the Race to Zero criteria but continues financing companies at the forefront of fossil fuel expansion, the credibility of its commitment shatters,” says Lucie Pinson from the NGO Reclaim Finance. “A small but increasing number of major financial institutions are indicating that the days of fossil fuel dominance are numbered, and they are willing to end their finance for fossil expansion.  Instead of seeking to appease the science-denying laggards, GFANZ needs to push its members to follow these leaders,” Pinson adds.

GOGEL was created to speed up the adoption of meaningful oil and gas policies by the financial sector. The database covers 95% of the upstream oil and gas production and 97% of upstream short-term expansion. It also includes comprehensive data on companies planning and developing new pipelines and LNG facilities. In addition, GOGEL highlights companies’ involvement in selected high reputational risk projects. These are projects that exacerbate violent conflicts, cause immense social or environmental harm or are challenged by lawsuits and community opposition. As of November 2022, nearly 200 financial institutions are using GOGEL with financial identifiers to scan their portfolios or to develop policies. 13 of these institutions publicly state that they use GOGEL. GOGEL’s main sources of information are company data sources such as annual reports, stock filings and investor presentations, Rystad Energy, and Global Energy Monitor. The full GOGEL will be updated each fall and expanded over time to cover further subsectors of the oil and gas industry.

GOGEL 2022 can be downloaded at www.gogel.org

Download of all GOGEL tables at the bottom of this page.

[1] The exact timeframe depends on the type of asset. Offshore assets generally have longer development periods than, for example, fracking assets.

[2] Own calculation is based on https://www.urgewald.org/five-years-lost P.9-10 and Eurostat: https://ec.europa.eu/eurostat/databrowser/view/ENV_AC_AIGG_Q/default/table?lang=en&category=env.env_air.env_air_aa

[3] Assuming all produced hydrocarbons are combusted. Own calculation is based on https://www.urgewald.org/five-years-lost P.9-10, Rystad Energy global production figures and the remaining carbon budget for a 50% chance of limiting global warming to 1.5°C as stated in https://essd.copernicus.org/articles/14/1917/2022/

[5] Meaning expansion which was not approved for development before 2022.

[9] Figures based on data from Rystad Energy