Today begins with an exciting interview in Annette Arjoon-Martins’ house. As a professional pilot, she discovered her passion for protecting the coast. She founded the “Marine Conservation Society (2000) and has ensured that the 145 kilometre “Shell Beach” was placed under conservation protection in 2011. By the way, it’s the only area along the coast. This is where four highly threatened sea turtle species come to lay their eggs: Leatherback, Hawksbill, Olive Ridley and Green Turtles.

Annette tells us that since 2012 the wind has become stronger and the waves higher. The indigenous community of the Arawaks, who used to live off turtle meat and eggs, now protects these impressive animals. Unfortunately, a huge flood destroyed the visitors centre in 2017 and even worse, caused the destruction of large parts of the beach. It has since been closed to visitors and 208 of the indigenous “Amerindians” have had to evacuate their settlement. Relocation to a slightly larger village hasn’t been successful. Without the open access to the sea and without any land of their own, their resettlement has meant a sudden removal of a centuries-old livelihood. They have become “climate refugees”, as Annette describes them.

The sea is already in the city

In Guyana, the climate change threat has been part of life for several years, but the poor are especially hard hit. Whereas the rich population can protect itself by choosing a location and using building measures, every flood over the seawall particularly affects this part of society. When water stands for days on end in Georgetown’s valleys, sewage is washed out of the toilets, houses decay and this all happens more often, then the most urgent problem is organizing “Climate Resilience” to face climate change.

Annette illustrates another important aspect of her work – the natural protection of the coast with mangrove woods. They grow far out into low water, the three different tree species play different roles and protect extremely species-rich bird life and fish structures. It’s vital that these woods are placed under conservation and where they are missing, are replanted. The EU has spent a lot of money and at least US$ 5 million are needed for the reconstitution of just one kilometre. Annette is also an important contact person in this respect.

Then Annette shows us her son’s film footage of the now more frequent floods along the coast. It’s disastrously visible that the present-day Guyana, now a carbon sink, will soon be a victim of climate change. When global warming causes the sea level to rise, more and more destructive waves will hit the low-lying coast with even greater force than over the last centuries. These floods will permanently salt the fertile land and bring the rice and sugar cultivation to a standstill.

Free ticket for the oil industry

Annette doesn’t hold back with criticism of the government’s support of the oil industry. She says she has nothing against the oil, but contracts should not have been made without a scientific assessment of animal and plant world sensitivity. She condemns this failure on several occasions.

Instead of dealing responsibly with oil and its consequences, Exxon has been given a free ticket for everything. Annette hopes that this situation will arouse international attention and enable support by civil society. She suggests using air observation for detecting oil catastrophes and a satellite programme for controlling the oil industry. 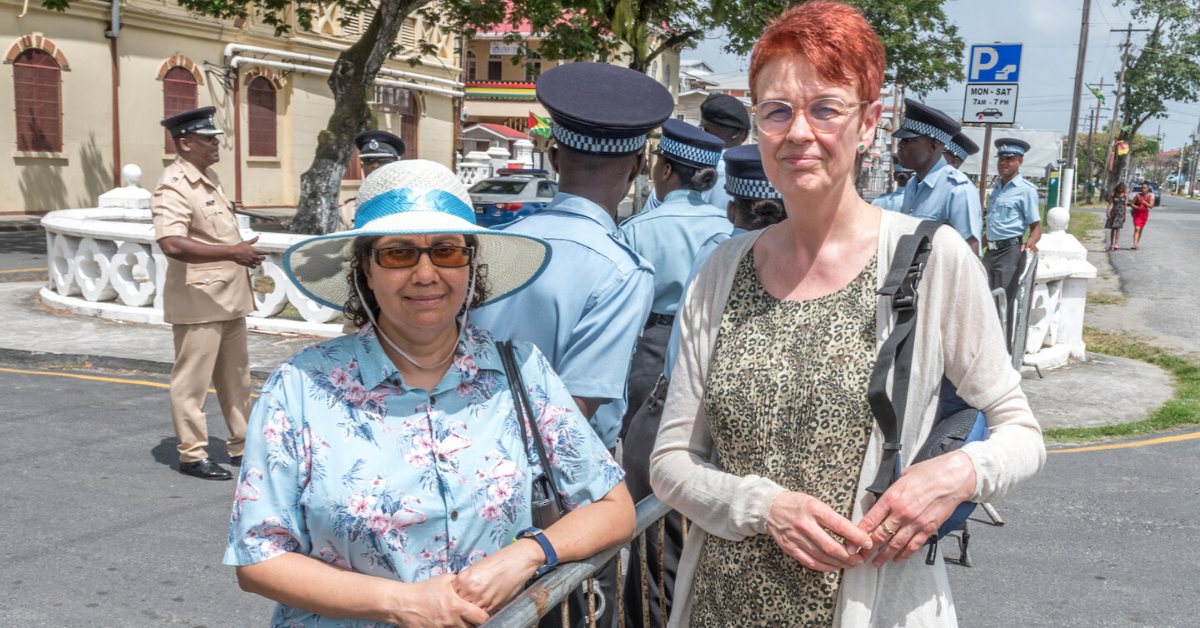 Just as we’re leaving the house, Melinda phones and invites us to be present at the court’s decision on the election result. Unfortunately, having come from abroad, we are refused entry and have to turn back. We use the opportunity to take more photos at another part of the sea wall and are yet again horrified by the degree of waste pollution, while at the same time surprised by the many different bird species inhabiting the mangroves. We especially admire the small flocks of conspicuous and wonderful scarlet ibises, on the hunt for tasty fish.

“Exxon has exploited our eagerness”

Luckily, Anand Goolsarran, a highly respected Guyanan and still active Stabroek News columnist, has agreed to give us an evening interview. He deserves his reputation as an incorruptible lawyer fighting corruption as the former President of the “Transparency Institute Guyana Inc.” and the country’s supreme auditor. He thinks it won’t yet be possible to decide whether the APNU-AFC government is less corrupt than the previous one, as it’s not been in power long enough.

He describes the deal with Exxon, Hess and CNOOC as unfair. The government, he says, has allowed itself to be lulled into complacency on its trip to Texas and signed whatever Exxon put on the table: “Exxon has exploited our eagerness”. His advice: the economy must be diversified, climate change taken seriously and infrastructure overhauled. “Stop drilling – Save the Planet”. At the end of the interview he said, and it sounded like both a sigh and a warning: “Oil is a curse”.