The German utility company Uniper and its soon-to-be parent company Fortum (Finland) have announced and endorsed very dangerous plans and projects, which would severely hamper the efforts for an energy transition away from coal and gas towards renewables. This is why urgewald and CAN Europe are hosting a series of webinars. Experts from various non-governmental organizations will discuss topics like the Energy Charter Treaty, the new coal power plant Datteln IV, the gas infrastructure expansion and the coal supply chain. All interested climate, youth and trade activists, scientists and NGOs are welcome to join.

All webinars have been recorded and are available below.

Burning coal is not only a disaster for the climate, it is also a very dirty business. Mining operations have led to environmental destruction and gross human rights violations in coal regions all over the world. Where exactly do Fortum and Uniper source coal for their plants? Ecodefense, urgewald and other NGOs have frequently informed the European utilities about the terrible situation in the coal-mining regions in Russia, South Africa, Colombia and the USA. Even though the allegations covered collaboration with paramilitary units, involvement in violence against trade union leaders, money laundering or tax evasion, both companies have never publicly excluded a company from their list of suppliers.

This webinar will provide insight into the current situation in Kuzbass, Russia, and the coal-mining regions Cesar and La Guajira in Colombia. We will also discuss Uniper's compensation claims for its coal plants and how their economic viability being based on cheap and dirty coal renders those claims unfounded.

Despite the urgent need to exit fossil fuels, Uniper is still investing in new gas infrastructure projects. It’s soon-to-be parent company Fortum openly backs this strategy, even though it is incompatible with its own strategy to „decarbonise society". Is gas a bridge or an obstacle towards 100 % renewables? Does new gas infrastructure fit into a Paris compliant company strategy?
This webinar will give an overview about Uniper’s participation in large gas infrastructure projects and show, why the planned LNG terminal in Wilhelmshaven is about to become a stranded asset in the near future. 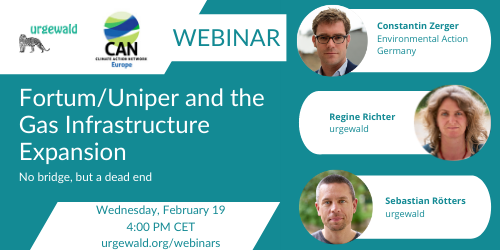 For further information, you can also contact the presenters:

The German Government’s announced coal phase out plan ignores the Paris Agreement, the national climate goals and the recommendations of the so-called coal commission. It would even allow Fortum/Uniper to open the new coal plant Datteln IV, which would send a disastrous signal to the world: Despite the exacerbating climate crisis and while climate scientist call for a rapid coal phase out, one of the richest countries in the world wants to connect a new coal plant to the grid. In fact, this would be a declaration of climate bankruptcy for both the German and the Finnish Government, who haven’t done anything to prevent this.
This webinar will have a look at the German coal phase-out law and provide background information about the coal plant Datteln 4 and the consequences, if it would be put into operation next summer. 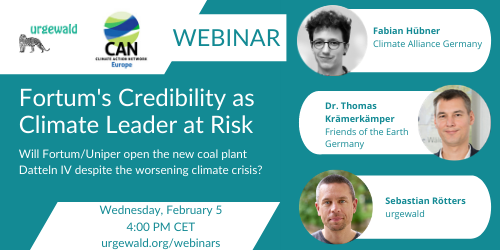 Report "One Treaty to Rule them All": Comprehensive and easy to read introduction to the Energy Charter Treaty:

Website that summarises the main findings of the "One Treaty to Rule them All" report and provides some infographics and basic information:

Corporate Europe Observatory video about Uniper's threat against the Netherlands:

ClientEarth's legal opinion arguing that Uniper has no valid case against The Netherlands but warning that the case may nevertheless undermine governments’ efforts to tackle climate change:

IEEFA's economic analysis on the Uniper plant in the Netherlands:

For further information, you can also contact the presenters:

The Netherlands passed a law in December that bans burning coal for electricity production by 2030. Uniper runs one of five coal-fired power stations in the country and has threatened to use the Energy Charter Treaty, an investment treaty from the 1990s, to extract about a billion Euro in compensation from Dutch taxpayers. The same treaty has been used in the past to attack a ban on oil drilling in Italy, new environmental rules for a coal-fired power plant in Hamburg and Germany's nuclear exit. This webinar will give you a short introduction to the Energy Charter Treaty and why it is a hindrance to the energy transition. We will also look at the Dutch coal phase-out law, how it links to the Urgenda court cases and why the Uniper threat to sue could spell disaster for coal exits in other countries. 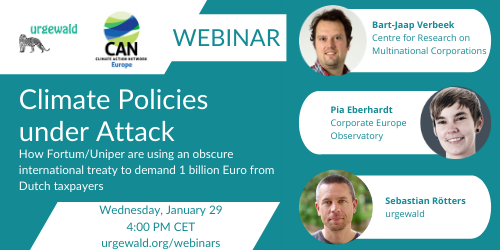 This briefing sheds light on the inconsistencies between Fortum’s self-ascribed green image and its actual portfolio and formulates demands by civil society organizations towards the Finnish government, Fortum and its investors.